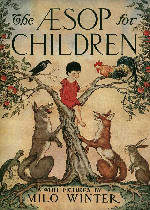 According to Herodotus, Aesop was a slave who lived in Samos in the 6th century B.C. His moral animal fables have delighted young and old for centuries. This fabulous full-color edition of the classic Aesop features the original illustrations of Milo Winter. This unique collection features 147 of the best-loved fables, including such favorites as "The Town Mouse and the Country Mouse," "The Ants and the Grasshopper," "The Goose and the Golden Egg," "The Wolf in Sheep's Clothing," and "The Hare and the Tortoise" and all their wonderful and amusing animal characters.