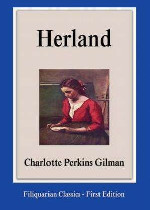 Herland is a utopian novel from 1915, written by feminist Charlotte Perkins Gilman. The book describes an isolated society composed entirely of women, who reproduce via parthenogenesis. The result is an ideal social order: free of war, conflict, and domination. It was first published in monthly installments as a serial in 1915 in The Forerunner, a magazine edited and written by Gilman between 1909 and 1916, with its sequel, With Her in Ourland beginning immediately thereafter in the January 1916 issue. The book is often considered to be the middle volume in her utopian trilogy; preceded by Moving the Mountain, and followed by, With Her in Ourland. It was not published in book form until 1979. 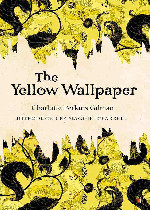 The Yellow Wallpaper (original title: "The Yellow Wall-paper. A Story") is a 6,000-word short story by American writer Charlotte Perkins Gilman, first published in January 1892 in The New England Magazine. It is regarded as an important early work of American feminist literature, illustrating attitudes in the 19th century toward women's health, both physical and mental.